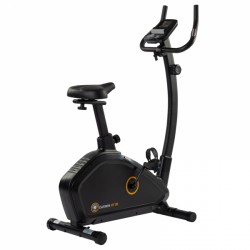 Anonymous, 15.03.2016 (DF-HT30)
(1) Seat position can be adjusted well (up, forward, backward). If you are short, say under 165cm, and are not flexible (i.e. injured, overweight, or getting old), it may be awkward to get on the bike. But this problem is pertinent to other similar bikes on the market. (2) Pedal cranks are straight (and not curved inside as in cheapo models) and, according to the blueprints, they seem to be removable. (3) Almost silent, but not completely at every RPM. At slow revolution speeds (up to and about 80 - 84 RPM) bike is very quiet; it keeps barely audible low hum at each gear. But the hum increases noticeably, although only up to a very reasonable level, when you pedal within the approximate range of 84 - 100 RPM. Yet, increasing pedaling speed over about 100 RPM this slight hum suddenly disappears and the bike is very quiet again, and remains so even if you keep continuously increasing the pedaling speed up to 183 RPM. (The 183 RPM clocking is rather fast pedaling for home biking. For example, famous 100m sprinter U. Bolt takes on average slightly under 5 strides per second when he runs the 100meters, and 5 strides/s on track has an estimated equivalent value of \"only\" 150 RPM on a bike; however, some mad cyclists can go over 200 RPM on bike. Of course how fast you really go depends on the simultaneously applied force/resistance/gear level. Obviously, if you are interested in fast heavy gear pedaling, ***** bike is much better choice.) Nonetheless, I think this bike can be used very well in apartment-type households without the constant fear that pedaling would disturb even the most sensitive neighbor (assuming the bike is placed top on a mat) or other members of the family. In contrast, virtually all low budget indoor bikes, trainers, air-bikes, etc. non-magnetic systems rattle like all hell broke loose if you start pedaling even at moderate pace (say 90 - 120 RPM) at middle gear. And thus, due to their noise level, they are problematic, in apartments, for regular use. (4) Pedaling experience is smooth enough. No feeling of too smallish rotation, like in many inexpensive bikes. Also no feeling like pedaling in a mud (or pedaling a stiff stepper) even when you gear up a bit. (5) Resistance levels: 1 - 8. The resistance levels are enough for most people. Probably also enough for most half-baked semi-athletes or even for those real athletes (except, say cyclists and speedskaters, for which, I have no glue what they need), who are looking for a basic and simple bike to do low key or medium secondary workouts (like recovery pedaling, fat cutting, basic low to medium aerobics, and occasional short bursts). (6) Heart rate sensor (hand): works so-and-so. Good only for steady pedaling. And works very well for that. Value adjusts with slight lag (as expected in case of hand sensors) and oscillates constantly within /- 1 beats of correct value given by a belt-type heart rate monitor in steady workouts. But the lag is noticeable and the value stays way too low from the accurate heart beat if you do workouts where your heart beat fluctuates heavily and relatively fast. (7) Body fat sensor (hand): this is a nice feature. seems to give good approximate estimate of range of values within where my fat % falls at the moment (however, i\'ve had not time to test the accuracy of this when there is a significant variation in my fat %). (8) Monitor also reports values for RPM, calories, BMI, distance, speed, six level fitness evaluation of recovery pulse after the session (the heart beat fitness evaluation is so-and-so; in my mind, it cannot properly separate Batman from a fatman, but may be of some use if you are not in very good condition). (9) Magnetic gear system is purely mechanical, no external power required for operation. And the monitor works with batteries. Thus, no plugging to the mains needed, as claimed erroneously on the Sport Tiedje web page. (10) Bike is rather gigantic in size, as other bikes in this class. The handlebar post (long tube)and the seat post (tube) could be white, instead of black, which would mask down the large size and still fit the style. The brand DARWIN is registered mark of Sport-Tiedje Ltd.; thus, the style combines well e.g. with Sport-Tiedjes (very nice) black 3G iron weight plates. The style and size of the bike are a bit demanding, though: If Batman had a \"little\" scooter, it would look exactly like this. Even so this is one of the better looking bikes I\'ve seen, but partly because I think most of the current low-budget bikes are simply ugly design flops. (11) Good, relatively inexpensive, solid, basic, quietly operating, smoothly pedaling stationary bike for many kind of people that is not dependent upon electricity.... [Lue lisää]
Hyödyllinen • Hyödytön
darwin HT30
0 henkilön mielestä tämä esittely oli hyödyllinen